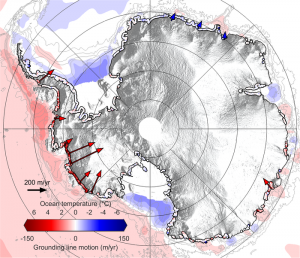 Rates of grounding line migration around Antarctica between 2010 and 2016. Most Antarctic glaciers flow straight into the ocean in deep submarine troughs. The place where their base leaves the seabed and begins to float is known as the grounding line. Information from ESA’s CryoSat mission has revealed that, over the last seven years, Antarctica has lost an area of underwater ice the size of Greater London. This is because warm ocean water beneath the continent’s floating margins is eating away at the ice attached to the seabed. Copyright CPOM