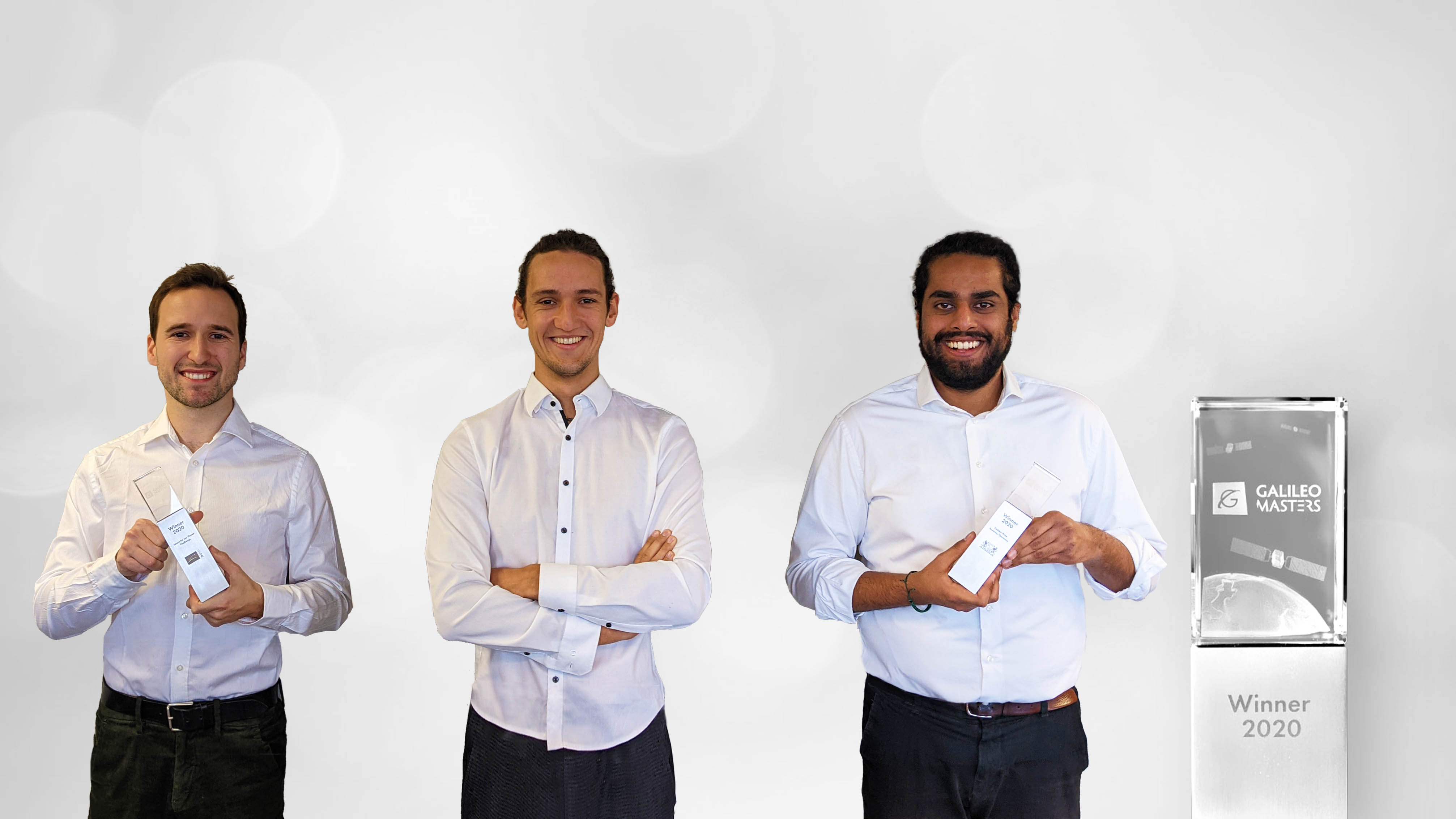 The winners of the international innovation competition the Galileo Masters 2020 were announced during the online Space Awards on 8 December as part of European Space Week 2020. At the Space Pitches sessions on 7 December, 17 winners selected by the Galileo Prize Partners had the chance to present their ideas to an international audience. Angsa Robotics has developed the autonomous trash collection robot “Clive”, which gathers up minor rubbish left on grass or gravel that would otherwise cause ecological and economic problems. The startup’s robot system was named the Galileo Masters 2020 Overall Winner by a jury of international experts. 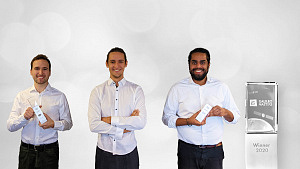 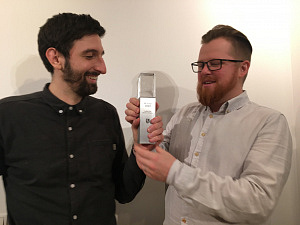 The Bremen winners of the Galileo Masters: Andreas Haselsteiner and Aljoscha Sander from Flucto.

Gilching, 8 December 2020 – Europe’s Global Navigation Satellite System (GNSS) and the accurate, highly reliable positioning data it delivers is an essential element in the uptake of autonomous vehicles such as cars, drones, or robots. Autonomous vehicles are already a growing segment in the transport and automotive sector, in urban air mobility, and in the drone market. By combining GNSS with on-board sensors and systems like cameras, radar, or inertial sensors, robotic applications are also being developed for construction, production, maintenance, monitoring, and the healthcare and household sectors. Satellite navigation data provides for the accuracy, integrity, reliability, and availability that are constantly required in operating autonomous vehicles.

2020, Angsa Robotics, has developed Germany’s first autonomous rubbish robot. “Clive” can move independently and detect and localise individual objects based on its unique artificial neural network architecture, which enables it to clean grass and gravel areas. Individual objects such as crown caps or cigarette butts are targeted for collection, but insects are spared. Angsa Robotics thus not only reduces the negative impact of rubbish on the environment. Since conventional sweeping machines designed for flat asphalted surfaces cannot be used, other types of areas typically have to be cleaned manually. Hence, “Clive” also creates an economic benefit for its customers. Its target use cases include the cleaning of festival venues after events and the daily cleaning of parks and other green spaces. Precise localisation via GNSS is essential to its operation: With better localisation, the robot can plan a more efficient path and clean a given area faster. After winning both the GSA Space for Our Planet Challenge and the Galileo Prize Bavaria, Angsa Robotics was presented with a EUR 10,000 cash prize as the Overall Winner of the Galileo Masters 2020, having beat out 23 other Challenge and Prize winners. In addition, this pioneering start-up was selected as one of the winners of the Galileo Incubation Programme, which includes an incubation and acceleration prize package worth up to EUR 62,000.

“Angsa Robotics is another concrete example of the innovation and applications that GNSS is enabling for the benefits of business, society and the environment. The combination of precise GNSS localisation with further state-of-the art techniques such as artificial intelligence and robotics captures in a nutshell the spirit of the three Challenges in this year’s edition of Galileo Masters: forward-thinking applications of Space for Future Generations,” stated Rodrigo da Costa, Executive Director of the European GNSS Agency (GSA) “We are proud and honored to contribute to Europe’s efforts and success in supporting entrepreneurship, competitiveness and sustainability” he concluded.

The Galileo Masters’ network of 101 partners from 18 countries focuses on the regional implementation of the competition to ensure a high level of diversity while enhancing both job growth potential and regional development opportunities. Its strong backbone is formed by 17 Prize Partners that are involved in specific areas at the local level in order to provide participants with valuable support in launching their businesses across Europe. At the 2020 Space Awards, seven Challenge winners were honoured by high-ranking representatives of the European Commission (EC), the European GNSS Agency (GSA), the German Aerospace Center (DLR), and the German Federal Ministry of Transport and Digital Infrastructure (BMVI).

“The Galileo Masters has given a significant boost to the rise of the GNSS industry in Europe,” explained Thorsten Rudolph, CEO of AZO. “The top 100 companies that have grown out of the innovative ideas of more than 13,000 Galileo Masters participants since 2004 have created more than 3,300 jobs and generated EUR 178 million in total turnover in 2019. In recent years, these companies have also raised around EUR 524 million in venture capital.” Thierry Breton, the Commissioner for Internal Market further announced the new European Commission Space Entrepreneurship Initiative CASSINI in his opening speech at the Space Awards Ceremony: “A major pillar of this initiative is to put in place a European Space Fund of EUR 1 Billion to boost startups and SMEs, in order to improve access to finance and dedicated seed and scale-up funding.”

By fostering entrepreneurs and startups, the Galileo Masters’ long-term objective is to strengthen Europe’s competitiveness with high-tech space solutions on a global scale. This was why the European Commission established Europe’s unique Galileo Incubation programme for the top six winners of the Galileo Masters. For the fourth time, this programme will offer the year’s winners access to dedicated incubation services (worth up to EUR 372,000 in total) at their preferred incubation centre in the Europe-wide Galileo Masters network.

ESA challenge set to enhance next year’s competition
The Space Awards, which were held digitally for the Galileo Masters during European Space Week 2020, marked the end of this year’s competition. The submission phase of the Galileo Masters 2021 will start on 1 April 2021. The European Space Agency (ESA) has already announced its participation in the event.
“Through ESA Space Solutions and our incubation programme, we are striving to scout and support entrepreneurs with truly revolutionary new services and products. Galileo Masters is a perfect match for our approach, and I am more than happy to confirm our participation with our own challenge in the 2021 competition,” stated a very satisfied Frank M. Salzgeber, Head of the ESA’s Innovation and Ventures Office, during the Space Awards.