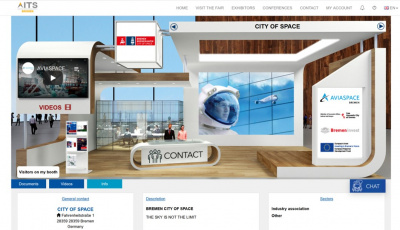 23.02.2021: From 23-25 February, more than 150 companies and over 250 participants will take part in the Aeronautics & Space Innovative Technology Summit (AITS) in Bremen. Originally planned as a hybrid event, the first edition of the trade fair will now take place entirely online. AITS offers international experts the opportunity to connect and exchange ideas while also providing an extensive conference program. However, the true core of the fair is the B2B matchmaking programme in which the organizer, BCI Aerospace, creates a personalized meeting agenda for participants and sets up business meetings in advance so that every participant can take full advantage of the networking opportunities. This concept has long been established in the aviation industry as AeroMart and has successfully taken place in similar forms in Europe, the USA, South America, China, Canada, and Japan.

“Bremen is excellently positioned in the field of high-technology and is among the world’s best in the aeronautics and space industries. So, the decision of the organizers in favour of the Hanseatic city was an obvious one. Unfortunately, due to the current pandemic situation, the event must take place online, but the platform that has been developed is an excellent replacement. We look forward to welcoming AITS on site next year,” said Holger Oelze, CEO Aviaspace Bremen e.V., regarding the event’s grand opening. The grand opening will be moderated by the Federal State Coordinators of Bremen for aeronautics, Prof. Rolf Henke and space industries, Mr. Siegfried Monser.

The state of Bremen welcomes an international audience to the official opening of AITS Bremen. Holger Oelze says, “the aeronautics and space industries are an important innovation driver in Bremen. The fair offers the opportunity to find new fields of application and to open up international markets. Many technologies that are already used in the aeronautics and space industry are also of interest to other industries. We would like to support technology transfer in these industries; the AITS summit is an excellent platform for this.”

AITS Bremen provides the latest information on manufacturing technologies in the aeronautics and space sector. Topics such as artificial intelligence, additive manufacturing, robotics, green technology and automation, are deliberated over in discussions and workshops. The speakers set to take part include representatives from Airbus, Premium Aerotec, ArianeGroup, IBM and Rolls-Royce. As a local on-site partner, the aeronautics and space sector association, Aviaspace Bremen e.V., will support AITS.

Under the heading “City Of Space”, the German federal state of Bremen will present itself at AITS with a virtual exhibition stand. There, participants will have the opportunity to learn more about Bremen’s aeronautics and space location and establish contacts with the various Bremen-based companies. The Bremen stand is financed by the European Regional Development Fund (ERDF).

Within the European aeronautics and space industry, there is rarely a topic in which companies from Bremen are not significantly involved. With over 140 companies, approximately 12,000 employees and upwards of 20 research institutes, Bremen and its surrounding area form an internationally significant ‘competence cluster’, generating over four billion euros, annually. A unique specialty of Bremen is that both sectors of aeronautics and space are equally and simultaneously represented. Given this particular characteristic, Bremen joins the ranks of larger European locations such as Hamburg, Toulouse and Seville.

Further Information about the event can be found here:  https://bremen.bciaerospace.com.
Interesting facts about Bremen as a City Of Space: https://www.aviaspace-bremen.de/en/