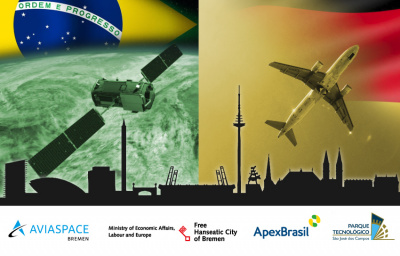 From 29 to 30 June 2021, the Senator for Economic Affairs, Labour and Europe, in cooperation with Aviaspace Bremen e.V. and WFB Wirtschaftsförderung Bremen GmbH, welcomed approximately 20 companies and institutions from the Brazilian aeronautics and space industry. In accordance with corona regulations, the visit took place exclusively online and thus represents a premiere for the Hanseatic City – the first reception of a virtual delegation in Bremen.

The aim of the visit was to promote business contacts and cooperation between aeronautics and space companies in Brazil and Bremen/Bremerhaven. It was also an opportunity to introduce the Brazilian players to Bremen as a business location and the companies and research institutions based here.

Project partners on the Brazilian side were the trade and investment promotion agency APEX Brazil, the Brazilian Embassy in Berlin and the São José dos Campos Technology Park, one of the largest innovation and entrepreneurial complexes in Brazil, located on the axis between Rio and São Paulo. The Technology Park is home to aeronautics and space companies such as Embraer, as well as SMEs and startups.

The Delegation Programme
The programme of the Brazilian delegation included virtual company visits to Airbus, ArianeGroup, DFKI, DLR OHB and ZARM. There were followed by specialist presentation and discussion groups, which were also led by the institutes ECOMAT, Fraunhofer IFAM, BIAS Bremen Institute for Applied Beam Technology. The Bremen delegation benefited from technical presentations by the Brazilian Space Agency (ABE) and the National Institute for Space Research (INPE). Lastly, discussions and talks were organized between the players from Brazil and Bremen in the form of matchmaking sessions.

Holger Oelze, CEO of Aviaspace Bremen e.V., “Brazil is an important international market for the aeronautics and space industry. As the ‘City of Space’, Bremen has set itself the goal of networking with other aeronautics and space regions, exchanging ideas, creating synergies and, of course, opening up business opportunities for our economy. For this, the virtual visit and the cooperation with the aerospace cluster Aerospace Brazil are an excellent foundation.”

Although personal meetings and contacts cannot be replaced virtually, the first successful virtual delegation visit was nevertheless an important experience. The technology used and the content modules can be transferred to other sectors and countries of origin and, if necessary, accompany delegation trips in the real world and thus make them more effective.

Holger Oelze, CEO of Aviaspace >Bremen e.V., “The résumé was consistently positive: exciting discussions and many approaches to past and future cooperation resulted from the Brazilian delegation’s visit to Bremen. I would like to thank our partners Apex Brazil, the Brazilian Embassy in Berlin and the São José dos Campos Technology Park for organizing the delegation visit. My thanks also go to the aeronautics and space companies in the state of Bremen and around the São Paulo region for making this visit possible and engaging with the new virtual format.”

At the heart of the aviation cluster in Brazil is Embraer, the third largest manufacturer of commercial aircrafts. Embraer is located in the state of São Paulo and comprises more than 130 companies in an aviation cluster that focuses on applied science and technology production.

The closest launch site to the equator – Alcântara Base – is located on the Atlantic coast and is operated by the National Institute for Space Research. Brazil’s exports in the aeronautics and space segment averages to US$5.5 billion per year.

Aeronautics and Space Industry in Bremen
In the state of Bremen, more than 140 companies and 20 scientific institutes drive the aeronautics and space industry. With around 12,000 employees, the industry generates over four billion euros per year. Leading companies such as the Airbus Group, ArianeGroup, Rheinmetall Electronics, OHB and their suppliers play a major role in this success. The success of these companies is based on the excellent qualifications of their employees. To ensure that this remains the case and becomes even better, Bremen is investing massively in developments for the future: interdisciplinary and intersectoral research and development strengthen the location and create synergies with other strong industries in the state of Bremen. For example, innovations and sustainable future applications are being created in the fields of materials research, digitalisation and robotics.

Impression of a Galileo satellite   ©OHB 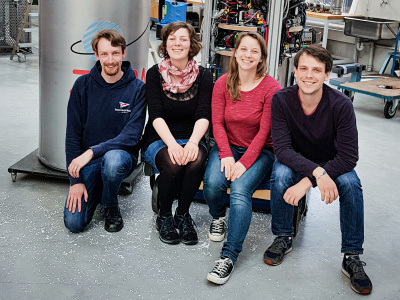 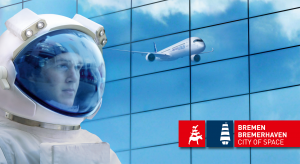